http://www.dailymail.co.uk/news/article-2790301/me-mews-little-miss-masterpiece-finds-inspiration-autistic-artist-inseparable-pet-cat-influencing-acclaimed-painting.html
Posted by Unknown at 12:48 No comments:

Saw this poster this morning missing since Friday very much loved lots of posters around. Please share 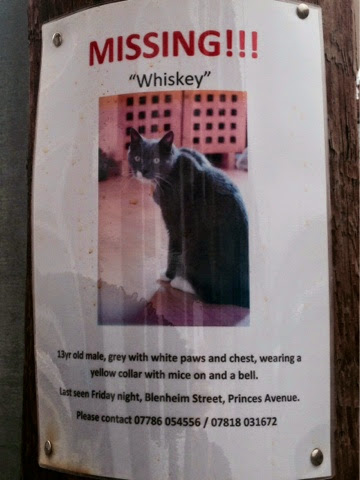 Have you seen me? Still Missing 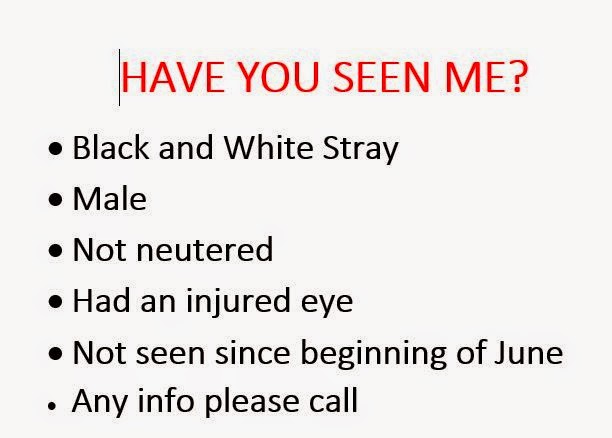 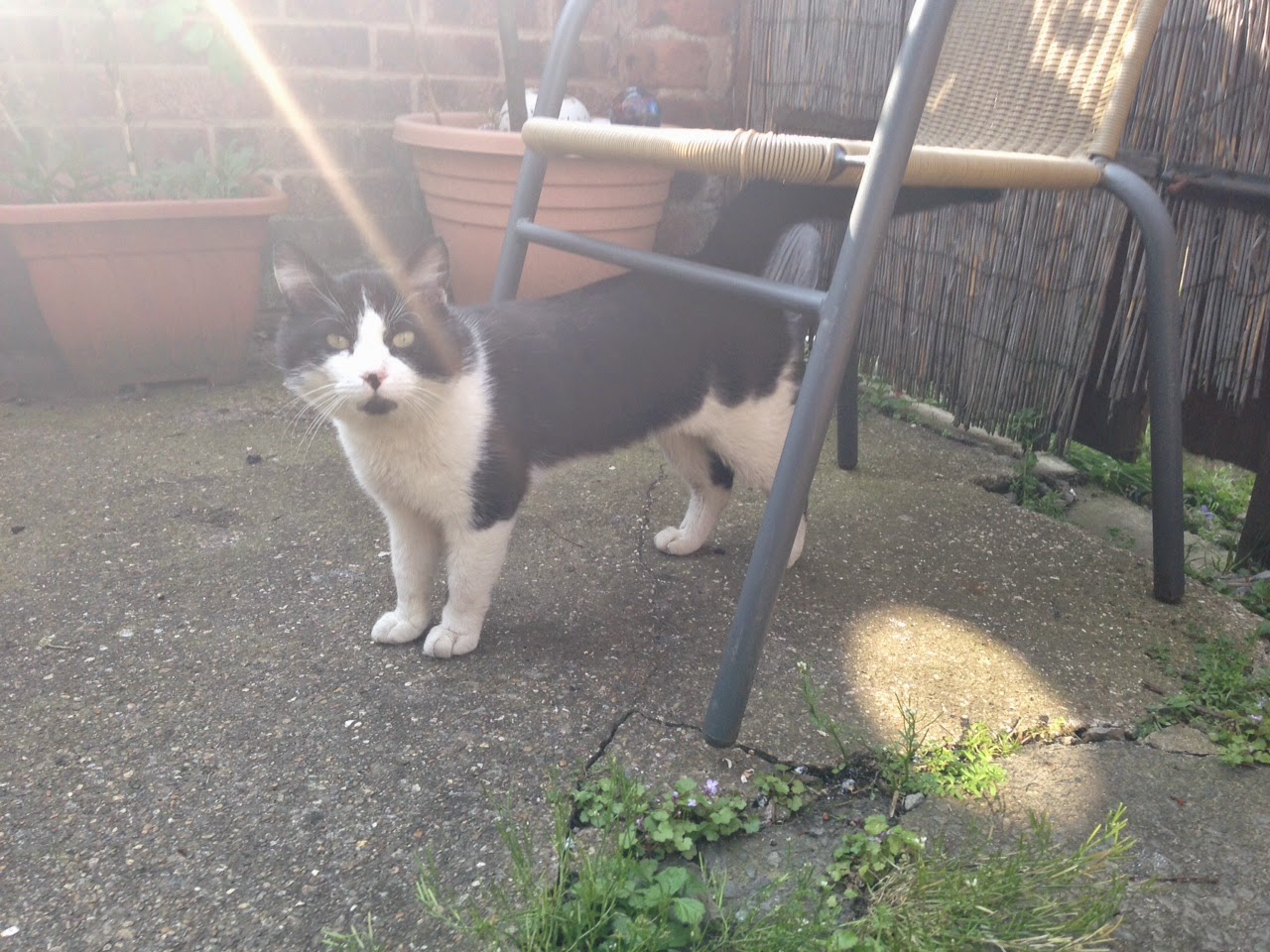 Still no concrete news about Cochise. I had a call a few weeks back that he may have been spotted a few streets away from a woman who fosters cats. She told me a cat looking exactly like him was hanging around a female with another tom cat and the two toms had been fighting.

She said she was going to try and catch him so she could get him neutered through Animal Welfare, I asked if she did get him let me know and bring back to me after the procedure so I could look after him.

I did not hear from her and got back in touch, unfortunately she had not been able to catch him but told me they had been sightings down certain streets. I have gone to look down these streets but did not see Cochise. I did see a cat black and white tom, not neutered who did look like Cochise but it wasn’t him.

It’s been over 2 months since I last saw him, I’m still hoping for some news or any information. I have put more posters up in the area and I will contact the woman again today if she has any further news. I’m also going to call around the shelters and some local vets if they have any info.

Have you seen me?? Cochise missing

Have you seen me?

My black and white stray has not been seen for about month now. I call him Cochise and he did have an injured eye at the time he went missing.

I contacted RSPCA about his eye and they agreed to give him treatment. Cochise seem to know this and disappeared for a few days. I had no idea how to catch him and he would have put up a fight. I contacted Small Pet and Cat Care who give me great advice and stayed in touch with me throughout.

When Cochise came back a few days later, his eye had been cleaned and looked so much better (see pic), he was eating again as well so I decided to not stress him out by taking him to vets. He was obviously getting looked after by someone else, this is the trouble with strays you don’t know if they are getting looked after or not.

This was the last time I have seen him, I’m hoping someone has just taken him in but it has been over a month now.

If anyone in Princes Avenue area has seen or got any further information please let me know as I am worried about him as he has never been gone this long. 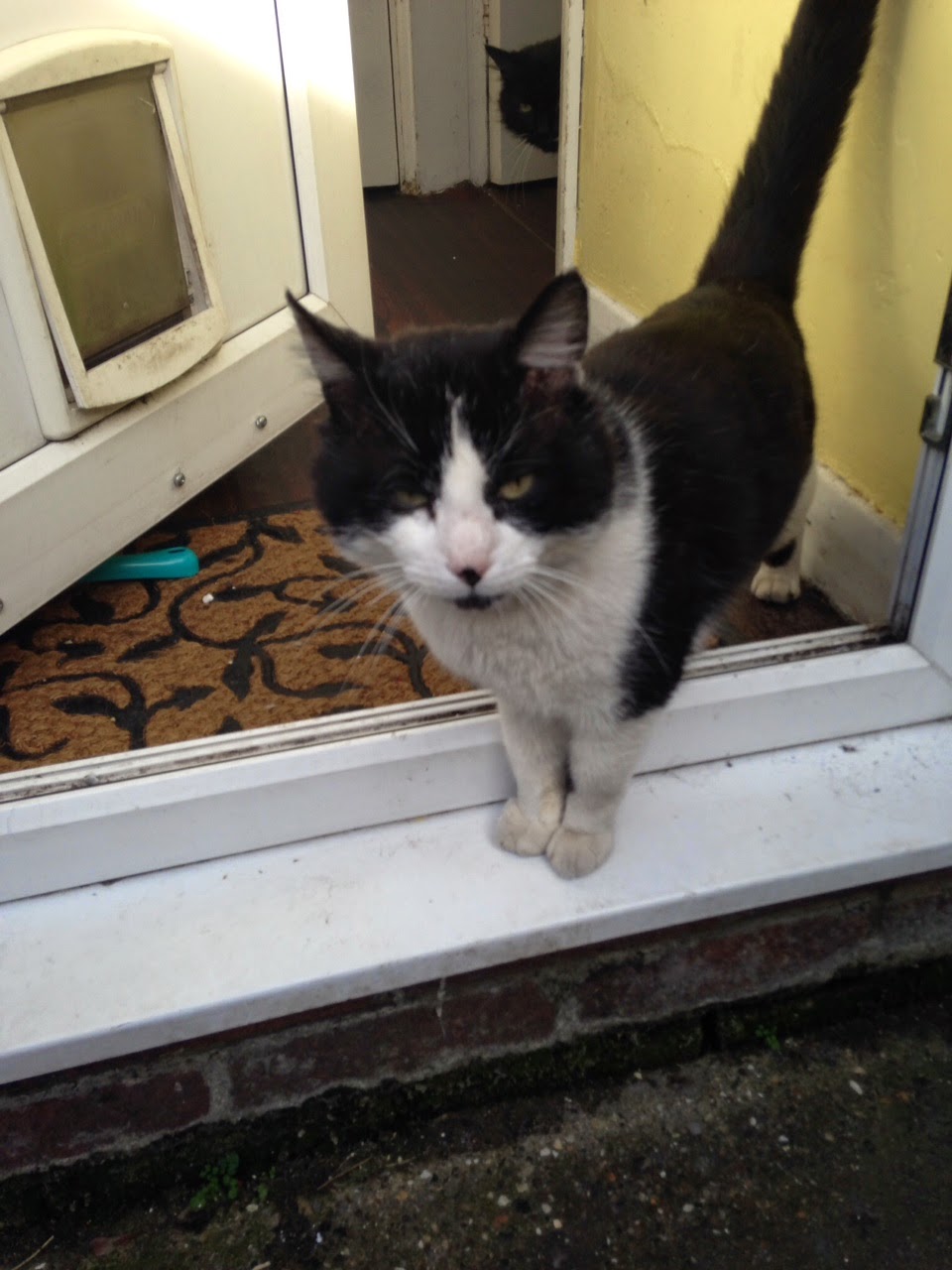 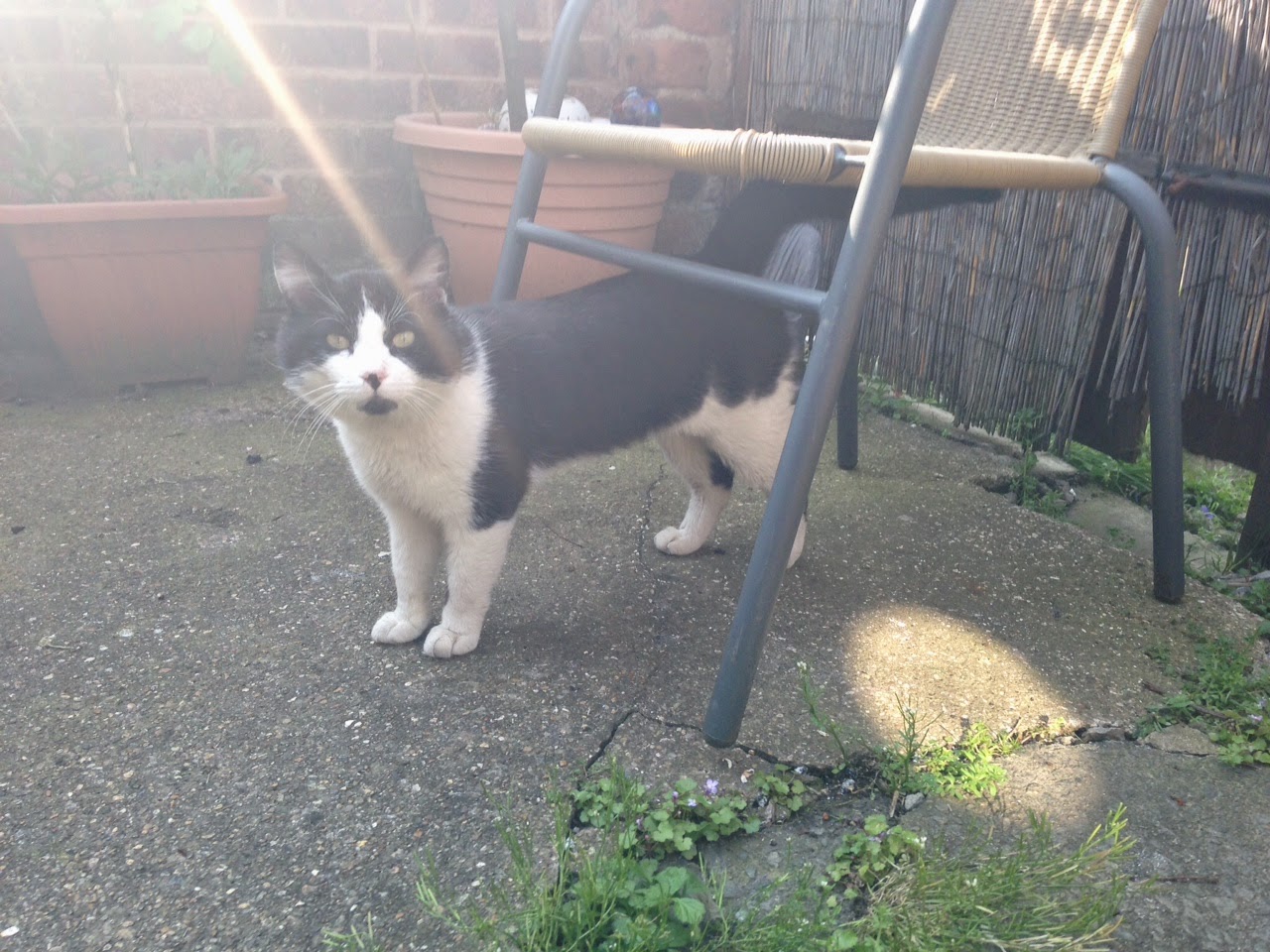 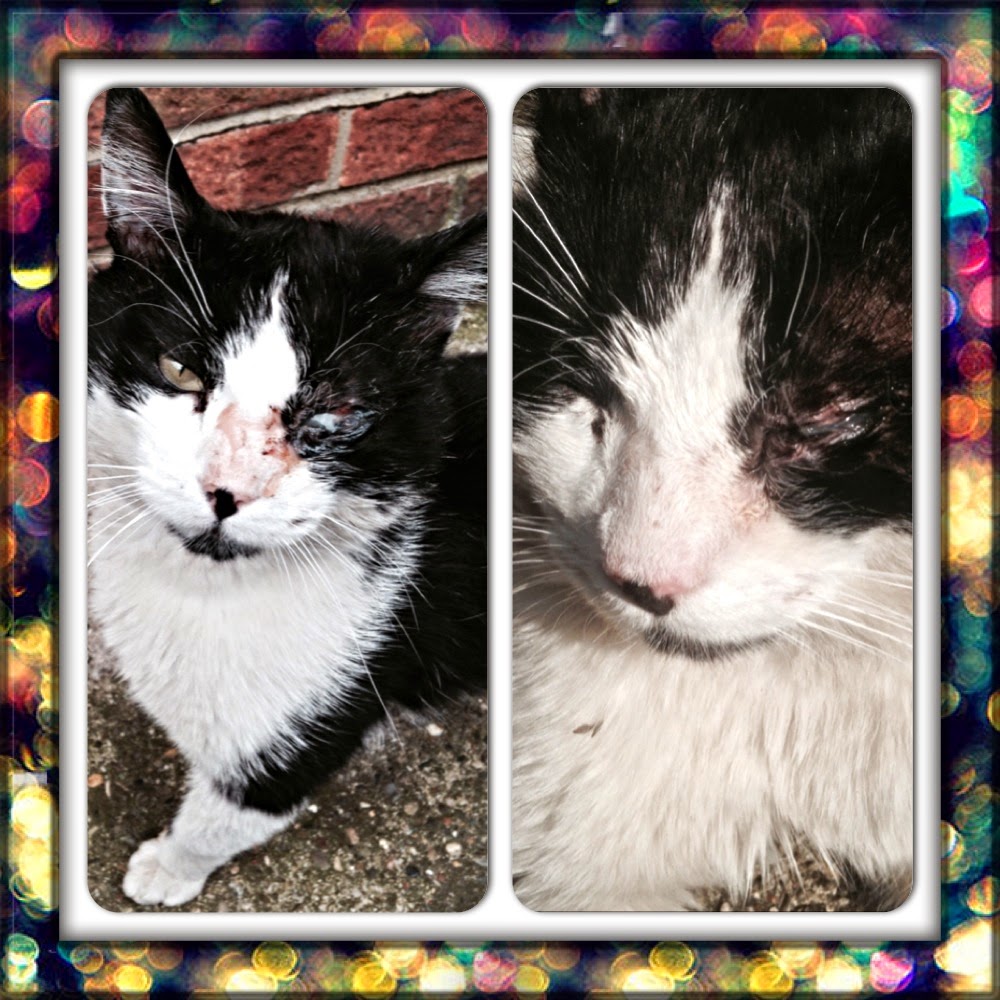 I think it's breakfast time - how my mornings start 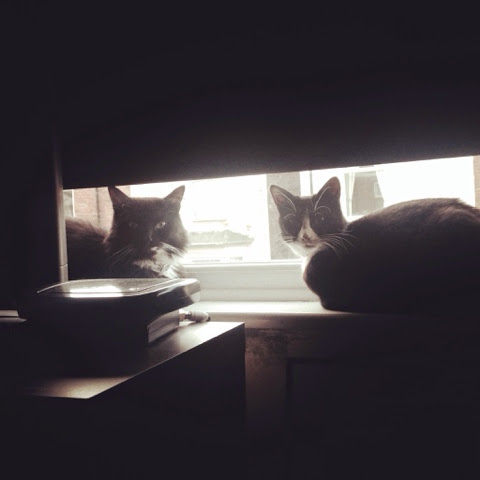 Last year I posted about a stray black and white tom which I started to feed. He was so skinny I could see his bones and I am not want to stand by and do nothing. So he started to receive regular meals from myself much to the dislike of Rambo and Gypsy.

The stray is what I would describe as a proper street cat, big build, confident strut and not what you call a cat who does snuggles! He looks like he has been in a fair few scraps and if you get too close he warns you off with a hiss. However saying this as his visits have become more regular he welcomes me with a meow, rubs against my legs and brushes his head against my hands when I’m feeding him.

He also has patience and puts up with Rambo and Gypsy who have tried their hardest to warn him off with hisses etc., Rambo once hissed right in his face and he did not even flinch, Rambo was not expecting this reaction and did not know what to do so just backed off looking slightly confused and bewildered. I know if he did not have this patience Rambo and Gypsy would not come out on top!

With these regular visits and no one responding on social media sites about him, I decided it was only right he had a name. I wanted a name to show his street cat and his wild side because he is definitely not a house cat or domesticated, my Dad suggested ‘Cochise’ Leader of the Chokonen band of the chiricahua apache of an uprising that began in 1861. I thought this was perfect so now the stray is called Cochise. I have been calling him this for awhile and I’m not sure if he knows his name or just recognises my voice but he does react to it.

Once the summer season had ended and the weather started turning colder and wetter I became more concerned about Cochise, I knew I could not bring him in the house due to Rambo and Gypsy  plus that’s just not Cochise to be in a house so in proper crazy cat lady style I bought a cat shelter! It’s a plastic shelter with a covering so no rain gets in, windproof and will not rot unlike wooden ones. I positioned this in the corner of the garden under some ladders so it is more secluded for him but also gave him a vantage point as he looked out so he knew what was coming (other cats) and nothing would come from behind the shelter. I also put some bedding in to make it super cosy, even street cats surely like to be cosy and warm? Once the shelter was positioned I just had to wait for Cochise.

Cochise came around teatime (he knows what time I get in from work) I got him his food in his bowl and put it outside the shelter. He did not notice the shelter at first food is way too important, however after his fill he went straight inside his shelter for a noisy around. He did not stay but I was happy he now knew it existed and where it was.

For several months I did not see Cochise in his shelter but I knew someone was sleeping in it due to the fur and dirt on the bedding. Corchise at this point was looking a lot happier, healthier and had put weight on, which I was so pleased about. Cochise and Rambo and Gypsy also seemed to have worked out an ‘understanding’ which resulted in less frequent spats. I’m sure Cochise is also getting looked after elsewhere as Princes Avenue is populated with cat people, he probably has an itinerary of who to visit and at what times.

One afternoon in the autumn with an afternoon off I arrived at home early and was thrilled to see Cochise asleep in the shelter. He was all snuggled and soon as he heard me he came out. I only had my iPhone on me so quickly took these two snaps of him.

Asbo cat who I featured in a post has not been round since Cochise turned up, they are both similar size and I think Cochise has won this territory. I still see Asbo but out the front way where he has claimed his new territory.

6 months on Cochise waits on the back wall which looks into the kitchen to catch my eye and let me know its feeding time and most mornings when I go out he has had a night in the shelter and walks around the corner for breakfast. I do feel in this situation he has domesticated me rather than the other way round. He does let me stroke him a lot more and likes to sit inside the house in the back porch, he never comes further. Cochise I think is quite an old cat and is wary of humans, I enjoy his visits and I am glad I am here to help him to continue his street cat days, fed, safe and warm. 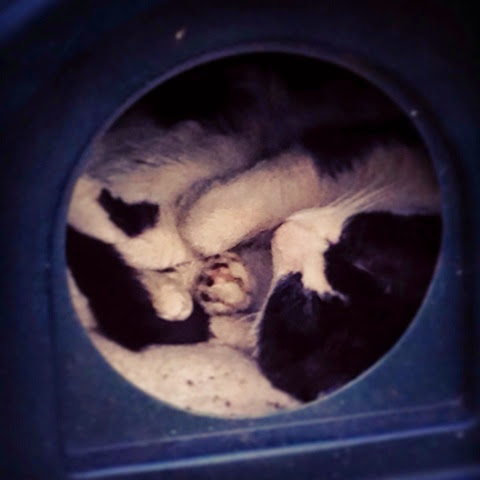 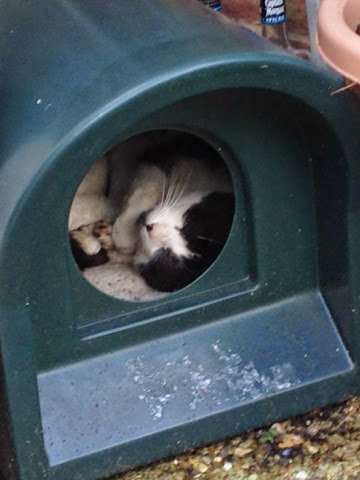 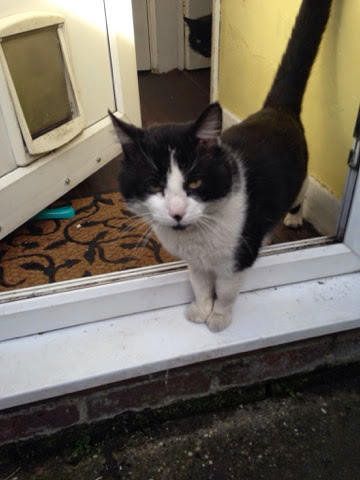 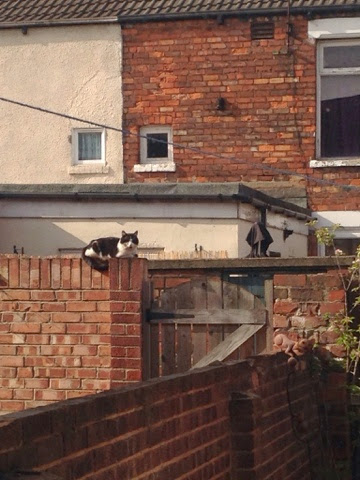 Our Friend Lola makes a return

In a past post I featured a small grey tabby who was becoming a regular visitor. She even stayed over some nights by getting in through the cat flap. She is a very cheeky little madam and runs straight into the house as soon as I open the door.

At one point I thought she was a stray or lost as she was very vocal, stayed in the house frequently, constantly asking for food and even stole some food a few times. I discovered she belonged to a house opposite my garden and her name was Lola. She continued visiting the house and was always on the lookout on the food! She would cry and cry at you for some. Gypsy obviously did not take this well so most of the times shows Lola on her way (not in a violent way just a hiss and a run at her seems to do the trick).

Lola does seem to have a close relationship with Cochise and I have spotted Lola trying to play with him a few times, he has shown a softer side and does play around with her.

Back in early December I returned from a week away to find Lola waiting at my front door, she welcomed me back by hassling me for food as soon as I opened the door, she stayed a little while then went on her way. That was the last time I would see her for a while.

Lola out of the blue basically just disappeared, there was no more visits. I suspected it was the wet weather and she decided to stay inside but as days turned into weeks then months I feared the worst.

I can’t remember exactly when it was but it was around  late February early March time, I was washing up and I noticed something move outside in front of the window. It took me a few moments to realise it was a grey tabby then to my amazement it was Lola. I went outside to see her. She had grown a little more and put on some weight however she did seem to be different. She wasn’t as friendly as before, but she did recognise and say a little hello. Before she would jump on me and come when I called for some affection now she doesn’t seem interested. Maybe she has just grown up in the months she had gone AWOL.

She still comes into the house but this is less and less frequent and is normally just a sprint in the kitchen and out again. Gypsy still runs her out but I have spotted Gypsy and Lola playing outside a few times, probably a typical teenage girl friendship. When Cochise visits and Lola spots him she is quick to come over and try to grab his attention, most of the time he doesn’t react to her but does sometimes gives in and lets his playful side out.

I am happy she is OK though and is around again even though she has dig up all my seeds and plants :) 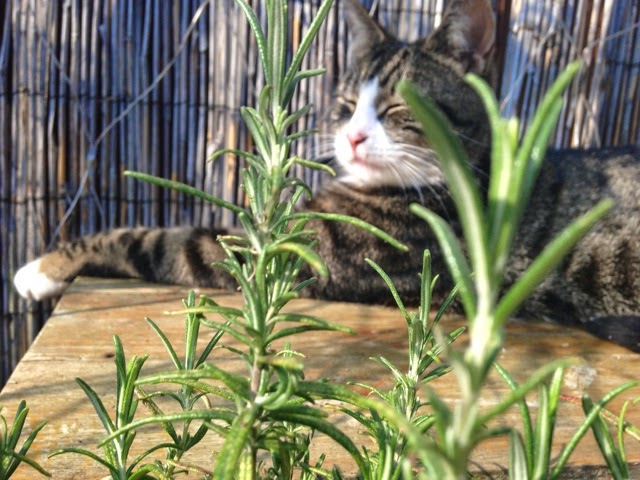 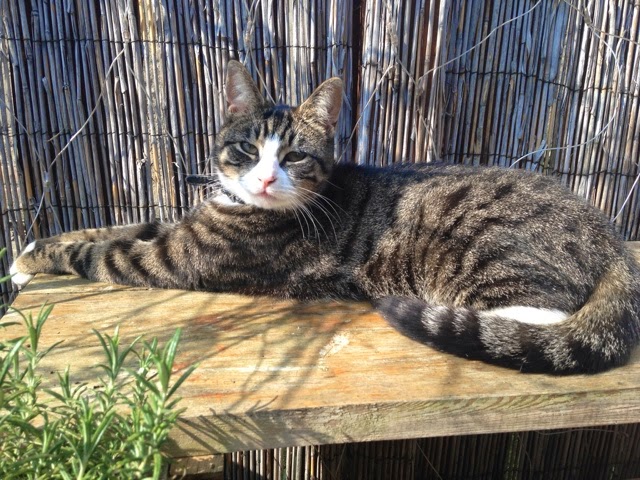 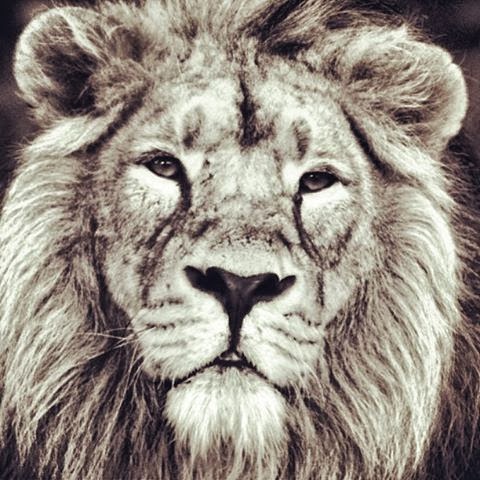 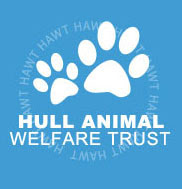 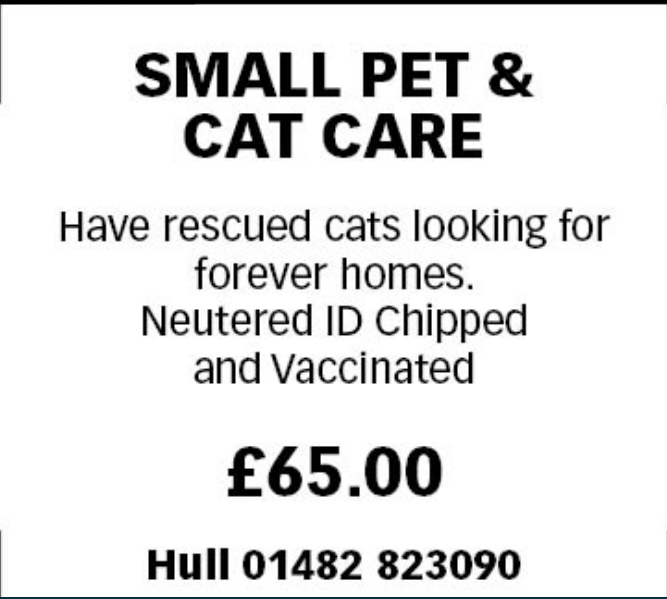